Being born and raised in Sri Lanka, I’m blessed to call the island ‘home.’ Having lived over seas for many years, I’m equally fortunate to see my country through the eyes of a tourist – time and again.

As a ‘proxy local,’ let me begin by telling youwhat I miss most about my homeland as any purebred Sri Lankan would. Of course, I’m talking about the food.

Although spices were introduced to Sri Lanka by traders from the Arab world, we have come to embrace them like no other nation on the planet.

How else would you explain waking up to spicy coconut sambol served over milk rice, or oven roasted bread (paan), or soft buns filled with onion sambol (seeni sambol) or hot tuna and potato paste, when half the world wakes up to bacon and eggs?

Although seeni literally translates into sugar, trust me, there ain’t nothing sweet about a Sri Lankan breakfast, save for the plain tea with which you wash it down. 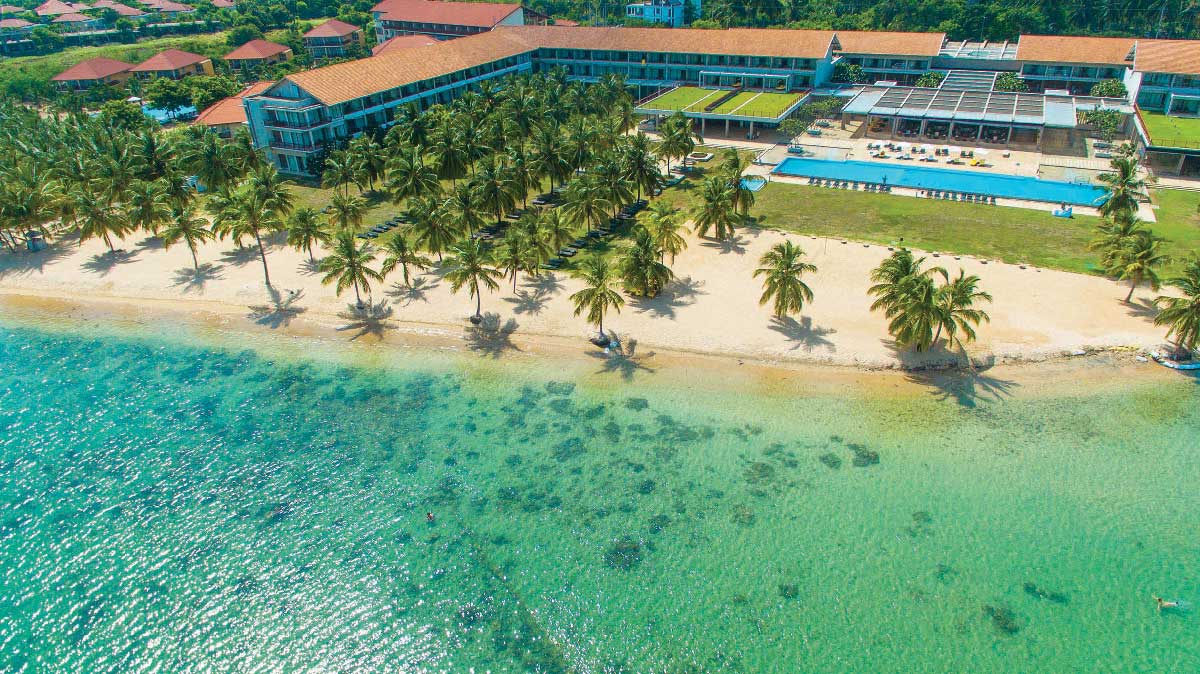 A tourist will soon figure out the difference between other popular dishes like string hoppers and egg hoppers. While the former is a steamed noodle-like pancake made with rice flour, the latter also has a pancake base that’s smothered with a sunny side up, and baked in a special pan. Both are
best enjoyed with coconut milk based curries and a fiery coconut sambol, which is infused with plenty
of Maldive fish chips and chopped onion.

The best thing about these dishes is that they’re interchangeable… and can be enjoyed for breakfast or dinner – and perhaps lunch as well!

Today, Sri Lankan cuisine is considered a delicacy in many parts of the world. Feeling famished following a long day of exploring in Vienna, I found myself in a gourmet Sri Lankan restaurant located in the outskirts
of the Austrian capital a few years ago. A meal for one cost 60 euros – and the short eats I was served were nowhere close to the fast food snack chains in Sri Lanka, like Perera and Sons and Fab. Incidentally, there is nothing ‘short’ about a fish cutlet or patty. Perhaps this is merely a ‘Singlish’ (Sri Lankan English, if you know what I mean) terminology that explains they are bite-size finger foods. 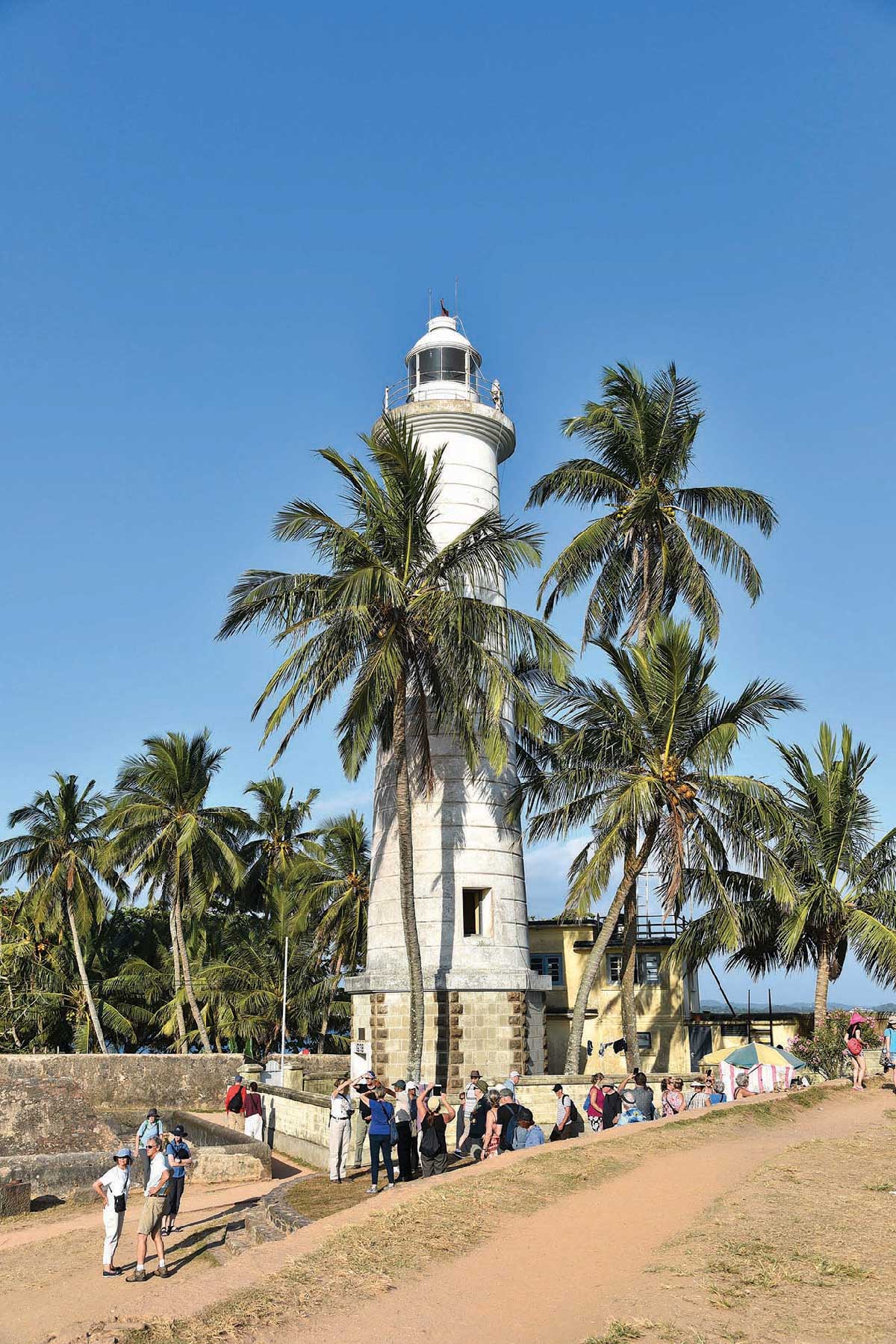 But there’s more than spicy food that keeps locals like me and tourists from around the world returning to the island. In a single word, it’s all about ‘diversity.’

Apart from the United States and Australia, where else in the world could you see sandy beaches, rolling hills, wildlife parks and a Dry Zone within the space of a day or two, at the most?

The tea plantations, estates, sprawling bungalows and cool mountain breeze in Nuwara Eliya (a.k.a. Little England) and its world-class golf course that sprawls in gentle rises and shallow dips couldn’t be more of contrast to the ancient capital city of Polonnaruwa with its ancient ruins, archaeo – logical relics and lush green paddy fields in the island’s Dry Zone – locales that are only four hours apart.

Heading along the coast, colourful cafes and souvenir shops dot the cobblestoned Pedlar Street in the Galle Fort that’s over three and a half centuries old. Shops with antique furniture, jewellery and a variety of knick -knacks play hide-and- seek among the oldworld architecture of the houses that line the narrow streets.

Travelling towards the commercial capital from Galle, the feathery fronds of coconut trees beckon passers-by to indulge in a pit stop at the picture postcard golden sandy beaches of Unawatuna, while the coral sanctuary of Hikkaduwa is a feisty tourist niche that is ever so popular for its beach parties and fests, and quirky shops.

Speaking of the quirky, the beach town of Negombo is a cultural melting pot, and is one of the best spots along the coast for curried or baked crustaceans – and just about any other seafood one may crave for!

Crossing over to the east coast, the extra large natural harbour of Trincomalee lies still and untouched, in stark contrast to Nilaveli Beach nearby with its soft sands, rolling surf and turquoise blue waters. 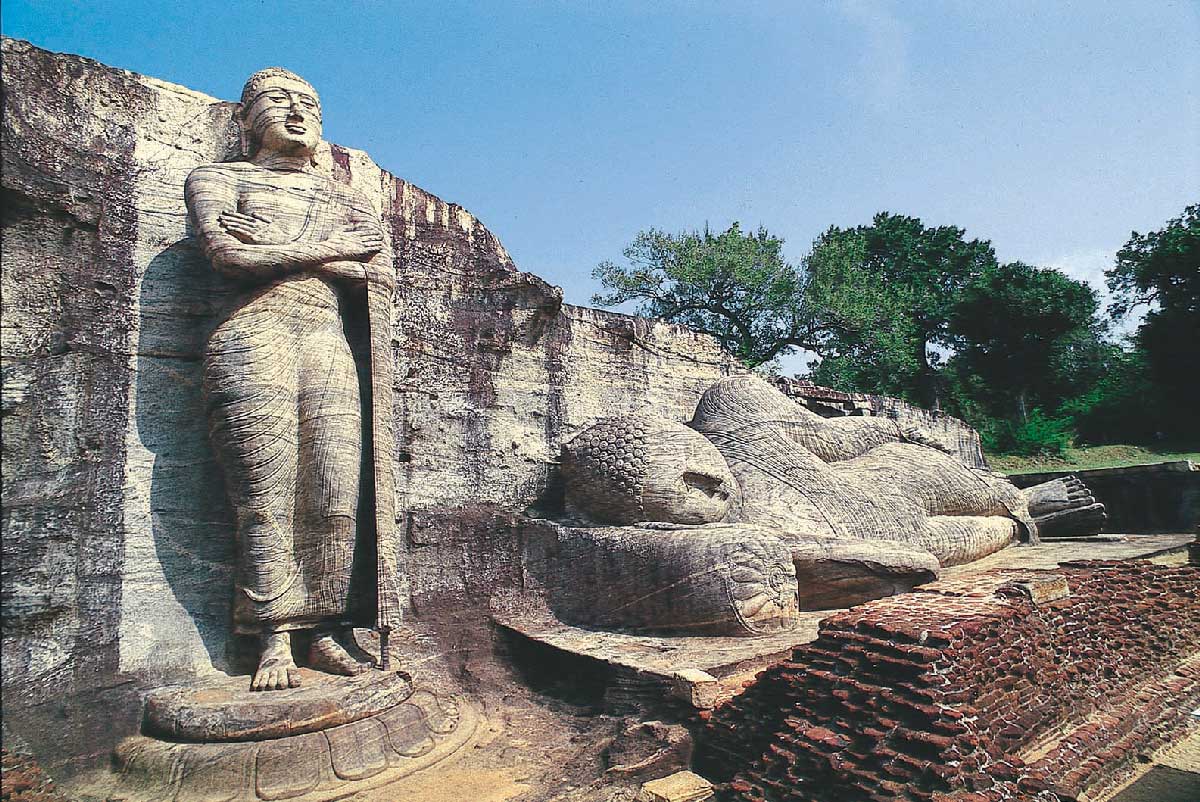 Religious and cultural freedom knows no bounds on this beautiful island. Thanks to colonial influences, churches mingle freely with mosques, temples and shrines. In fact, they stand next to each other in many major cities – as friendly neighbours so to speak.

Reflecting the many faiths on the island, Adam’s Peak lies nestled between the Ratnapura and Nuwara Eliya Districts. Travellers of all faiths make the pilgrimage to the summit that stands at a height of over 2,200 metres. St. Joseph’s Cathedral – a hallmark Roman Catholic Church in the sacred city of Anuradhapura – is an example of how a holy sanctuary that is heralded as the cradle of Buddhist civilisation embraces another religion. Kataragama, named after the deity Lord Kataragama, is one of the most important sites for religious pilgrimage in the country – irrespective of one’s faith, let it be said. This holy town’s kovils, shrines and mosques are revered by Hindus, Buddhists and Muslims alike. The annual Kataragama festival presents a mass of colours, pageantry and sacred vows, which are coupled with elephants, dancers, jugglers, fire breathers and worshippers, all waiting to receive blessings from Lord Kataragama.

At the northern tip of the island, the Nallur Kandaswamy Temple in Jaffna with its earthy brown arches, is a colourful cultural and religious icon that is inextricably linked to the Hindu identity on the island. 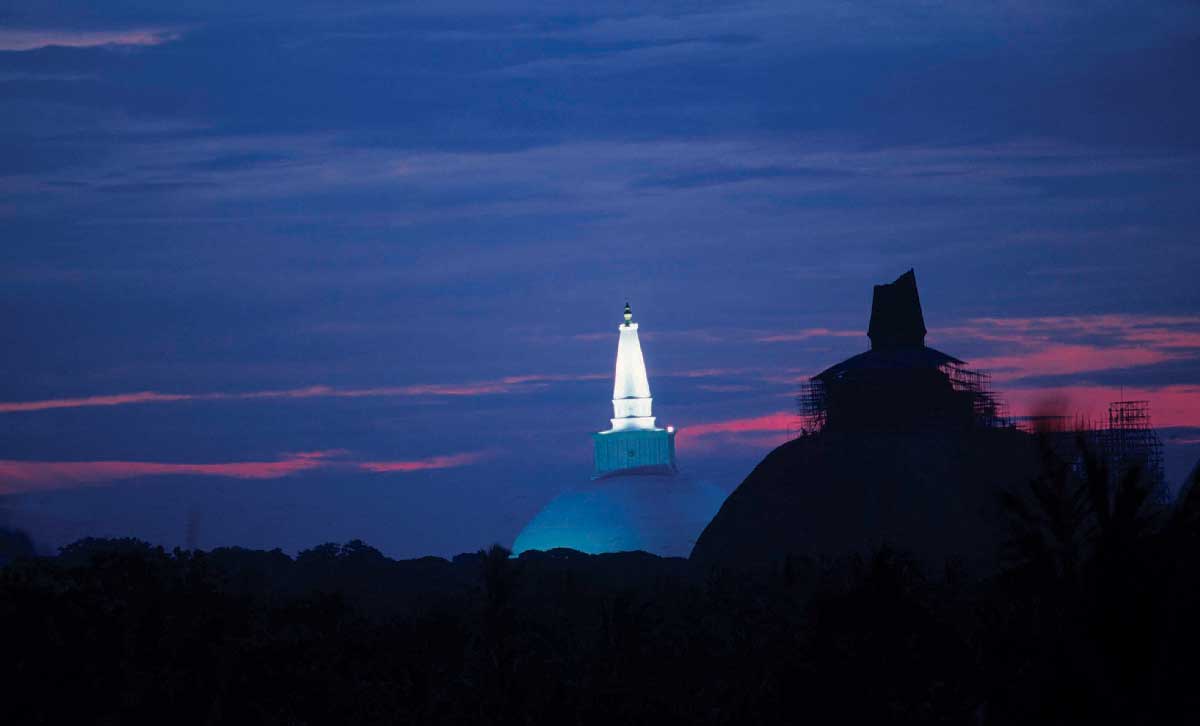 Did you know that Sri Lanka boasts no less than eight UNESCO World Heritage Sites? They include the ancient cities of Polonnaruwa, Sigiriya, Anuradhapura and Kandy, and the Golden Temple of Dambulla, old town of Galle and its fortifications, Sinharaja Forest Reserve and Central Highlands.

The sacred city of Kandy was the last capital of the Sinhalese kings. It is also the site of the Temple of the Tooth Relic– which holds the sacred tooth of Lord Buddha – where thousands flock from far and wide to worship and pay homage. 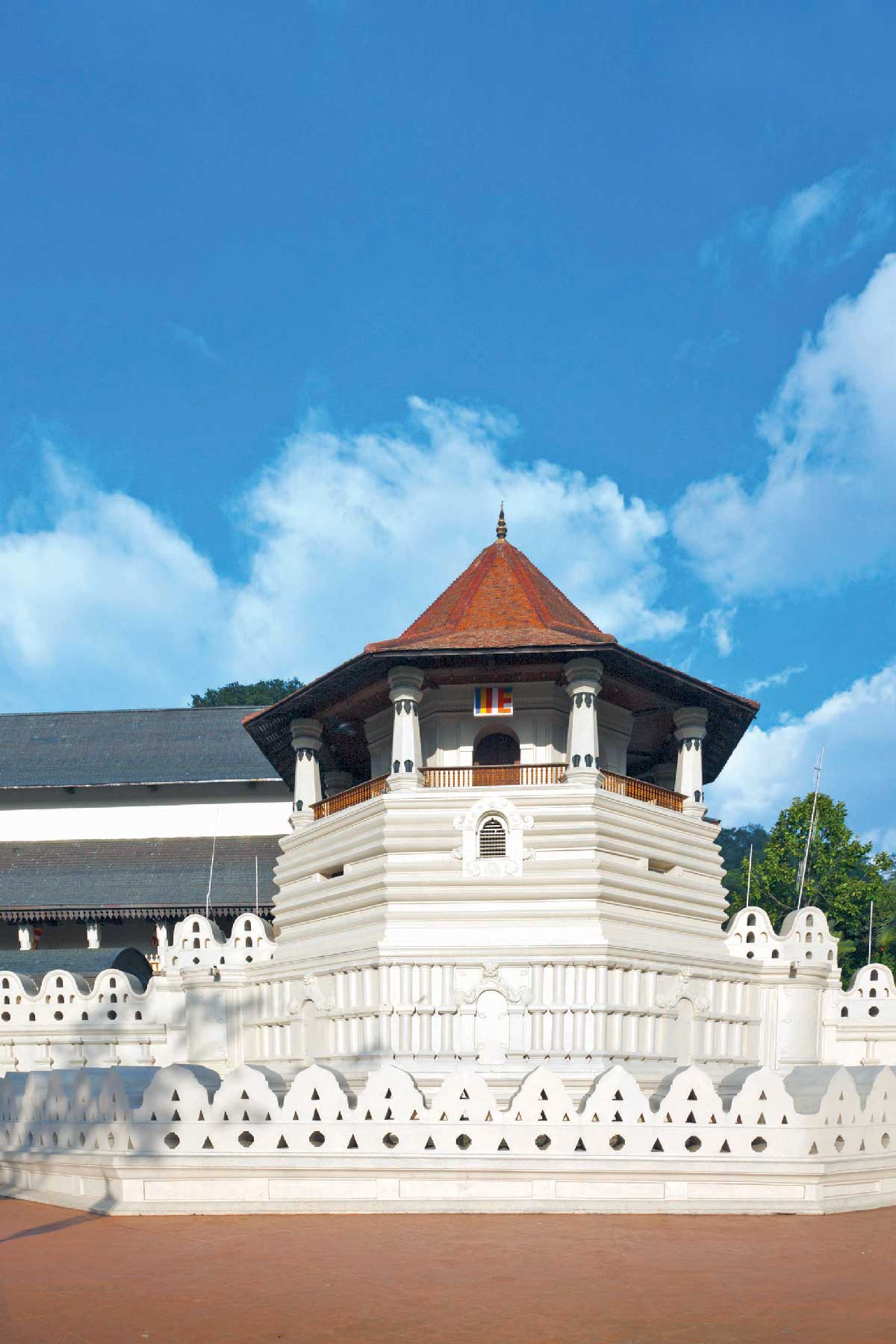 Our island paradise is not devoid of a golden temple either with the Golden Temple of Dambulla and its impressive rock cave monastery, centuries old statues and sanctuaries. And nearby stands the lion rock fortress of Sigiriya, known for its colourful frescos of beautiful maidens and ancient poetry inscribed on the rock walls.

Among the other heritage sites are the Sinharaja Forest Reserve and central highlands, which comprise three protected areas that are famed biodiversity regions – the Horton Plains National Park, Knuckles Conservation Forest, and the breathtaking and jaw-dropping World’s End clifftop. The highlands are home to several endangered species of animals like the purple-faced leaf monkey, as well as certain ferns and flowers. And the word ‘Sinharaja,’ which literally means ‘Lion Kingdom,’ is a rainforest turned hotspot for rare trees, insects, reptiles, birds and mammals.

Another secluded sanctuary that is famed for its wildlife, Yala National Park is home to a myriad species, from the common garden lizard to peacocks that proudly strut at dawn. Yala is home to the highest concentration of leopards in the world. 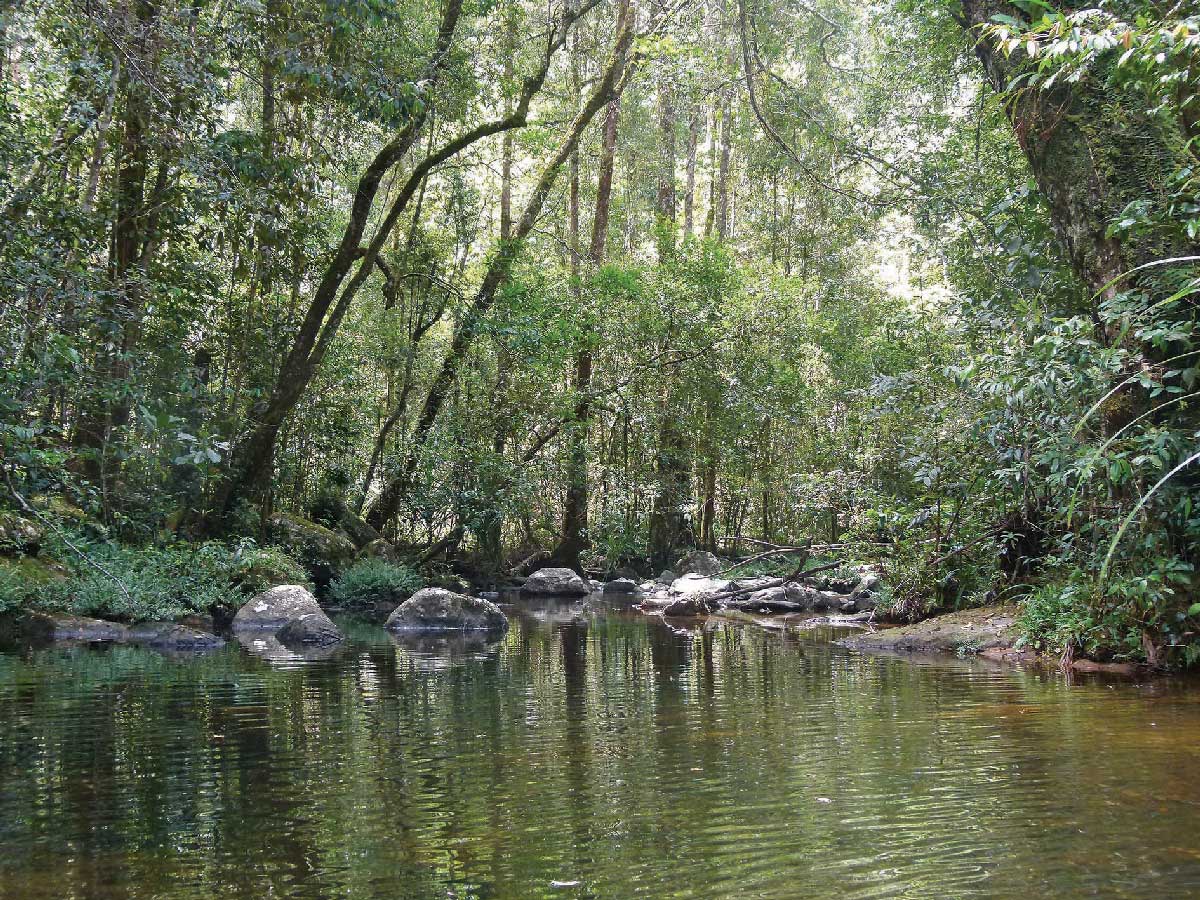 Apart from the picture post – card-like Baker’s Falls in Horton Plains, the country is blessed with many other natural waterfalls that are often over 10 metres high. St. Clair’s Falls (in Talawakelle) – christened ‘Little Niagara’ – runs through a neighbouring tea estate, making for a truly magical landscape.

You’d like to explore further? Well the Devon Falls is also located nearby. And the Dunhinda Falls, which is situated five kilometres away from Badulla, gets its name from the Sinhala word ‘dun’ – meaning mist. Gushing water cascades over 200 feet and ends up in a serene pool below. And the Bambarakanda Falls is Sri Lanka’s pride, standing tall amid a pine tree forest, sending water spiralling down over 850 feet. These falls are also located in Badulla. Hospitality If you’re wondering where to stay, Sri Lanka is home to several affordably luxurious international hotel brands, coupled with fivestar properties and resorts owned and run by Sri Lanka’s top-notch hoteliers.

The commercial capital Colombo boasts a number of five-star and other hotels, many of which are listed in this edition’s guide to Colombo with the entry of more global brands on the cards in the not too distant future.

But there’s more of the same beyond the city limits and across the island. Leading local hotel chains such as Cinnamon Hotels & Resorts, Jetwing, Aitken Spence, Tangerine,Amaya, Colombo Fort Hotels, Asia Leisure, Citrus, Anantaya and Browns offer high end hospitality in many parts of the island. They are complemented by a string of global brands such as Shangri-La (Colombo and Hambantota), Taj (Bentota), Marriott (Galle), Amari (Galle), Aman (Tangalle and Galle), Anantara (Tangalle and Kalutara), RIU (Ahungalla), OZO (Kandy), Anilana (Pasikudah and Nilaveli) and Centara (Beruwela and Pasikudah). The range of Ayurveda and spa treatments, scrubs and baths, as well as herbal and scented products that rival the best in the world, are on offer in Sri Lanka. From homegrown cinnamon to Ceylon Tea, every bath and beauty essence has a local flavour!

As for the excitement of water-based activities, the sea off the Kalpitiya peninsula is a favourite spot for dolphin watching excursions while blue whales and fin whales and if you’re ‘lucky,’ a killer whale or two! are on show off the coast of Mirissa.

Ah, and those branded Arugam Bay slippers are to die for! You may or may not wear them but they’re named after arguably one of the world’s best places to ride a wave and catch a surf break – that’s Arugam Bay, of course!

From dangerous, winding hairpin bends to endless highways, Sri Lanka has them all. For a more rustic experience, wind along the hills of Kadugannawa, heading towards Kandy, to catch glimpses of breathtaking mountains and valleys that fall away from the steep incline on which the Udarata Menike (train) rumbles
along.

Reflecting the more modern times, reaching the international airport in Katunayake or the historic Galle Fort from Colombo is now a virtual breeze, courtesy the island’s recently constructed express –
ways. Similarly, the ‘daha ata wanguwa’ (‘18 bend’ road) is a paved road that links Kandy and Mahiyanganaya. While it was once a scary and arduous drive, the road has been widened and the bends broadened although the spellbinding views remain in full view!

It is, in fact, in the ancient forest town of Mahiyanganaya that you can catch a glimpse of the Veddas – Sri Lanka’s indigenous people. Vedda literally means ‘forest dwellers.’ Known also as Wanniya-laeto, they’re said to be descendants of the island’s original Neolithic community, dating back to at least 16,000 BC. Today, tourists have the option of experiencing life with the Veddas as many tour companies offer treks to Vedda village camps. That’s Sri Lanka: once the remotest of jungles; now a virtual paradise!