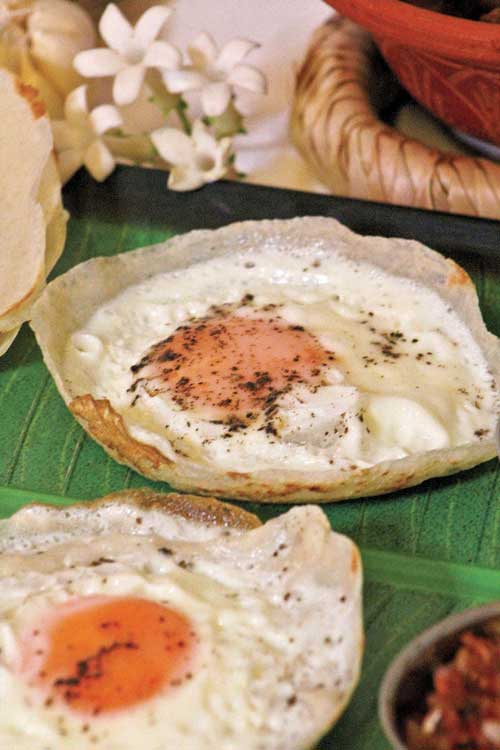 Hoppers are delectable mains and sometimes a fulfilling snack as well. They have been famously described as a type of crepeor worse, a pancake. Both these attempts at describing a hopper seek to fit it into some category rather than describing the dish for what it is!

In fact, a hopper is best described by its characteristics viz. usually bowlshaped with crispy outer walls and a thick soft centre. Made from a fermented rice flour and coconut milk batter, it is baked on a stove top in a hopper pan. This bowl-shaped food can act as a dish with an egg and other condiments.

Hoppers come in different flavours and shapes; but the authentic Sri Lankan hoppers are either bowl-sha – ped or half bowl-shaped. In South Asia and parts of India that share similarities in food, hoppers are bowlshaped and in some rare instances, flat! They’re also baked with minced meat, vegetable curries or mixes. This delectable food is available in three flavours plain, milk and treacle. The milk and treacle varieties are snacks and available at teatime. They are half bowl-shaped as they’re fold ed over after being baked. These hoppers aren’t always available since they are baked only in the afternoon or on special occasions and at themed events.

Many restaurants add their own spin to this humble crispy dish. These range from natural flavouring and colour such as beetroot, spinach or carrot, to creating oversized hoppers and adding cheese or even ripe bananas and folding them over to retain the flavour. 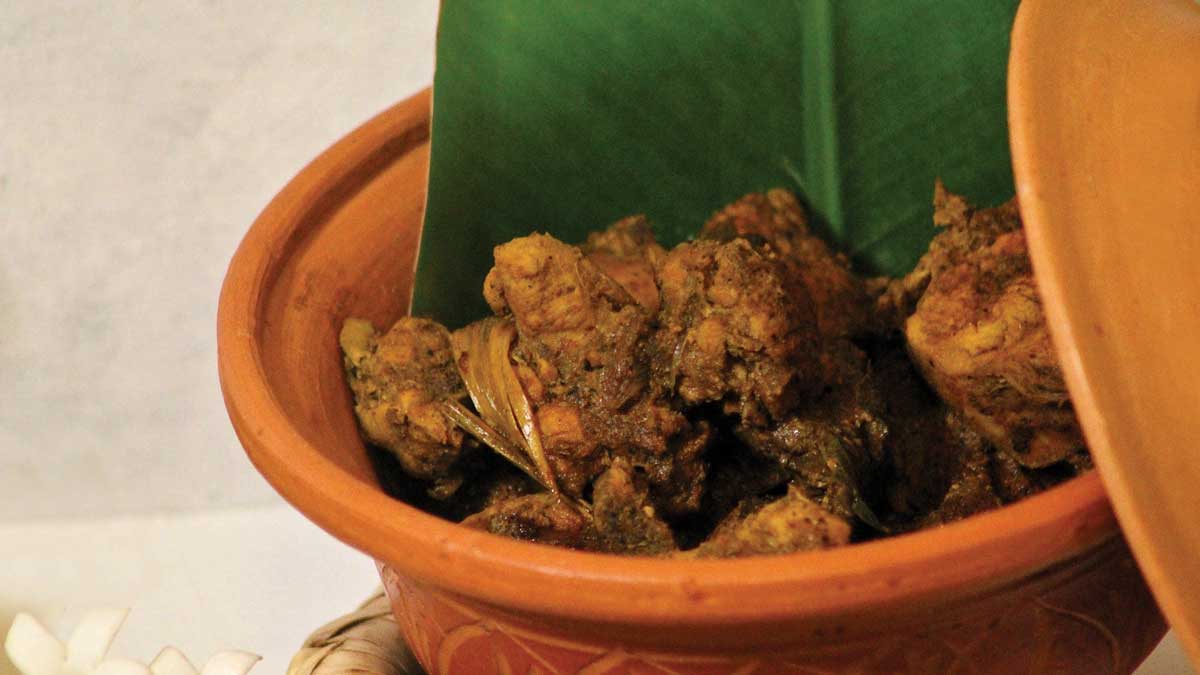 The versatility of a hopper is apparent in its variations but the true star is none other than the plain hopper and its sidekick the egg hopper.

Both plain and egg hoppers are invariably prepared for dinner. There’s nothing plain about a plain hopper when two conditions are met – that the crispness of its outer wall is both delicate and sturdy, and the taste is a perfect balance of sweet and tangy.

But even if this perfect hopper is elusive, any other plain hopper is quickly redeemed by the numerous side dishes that a hopper harmoniously marries! These sides range from simple onion based chilli and lime infused sambol (lunumiris) and tangy sweet onion stir fry (seeni sambal) to the chunkier Maldive fish chilli infused katta sambol.

All these can be scoopedup easily into bite-size mouthfuls with the crispy part of the hopper. But for a complete meal, hoppers are paired with a curry made of meat or fish and even some ingeniously roast chicken dunked in curry.

And that tricky sidekick egg hopper with its runny yolk, which is seasoned with crushed black pepper and salt, is eaten with a sambol of choice and curry. Yet, these are only the conventional ways in which a hopper is eaten.

A piping hot plain hopper can also be eaten with butter, a sprinkling of sugar and a few drops of lime juice. Other combinations include butter and Marmite, a banana or sweetened freshly scraped coconut.

Whichever way a hopper is eaten, it’s an experience. From breaking and eating the crispy part, and then down to the thick centre, to commenting on the price of an egg – hoppers are also an indication of economic times.

This delicious food is versatile and fulfilling, and requires no skill to eat… except concentration and enjoyment! Anyone for hoppers?